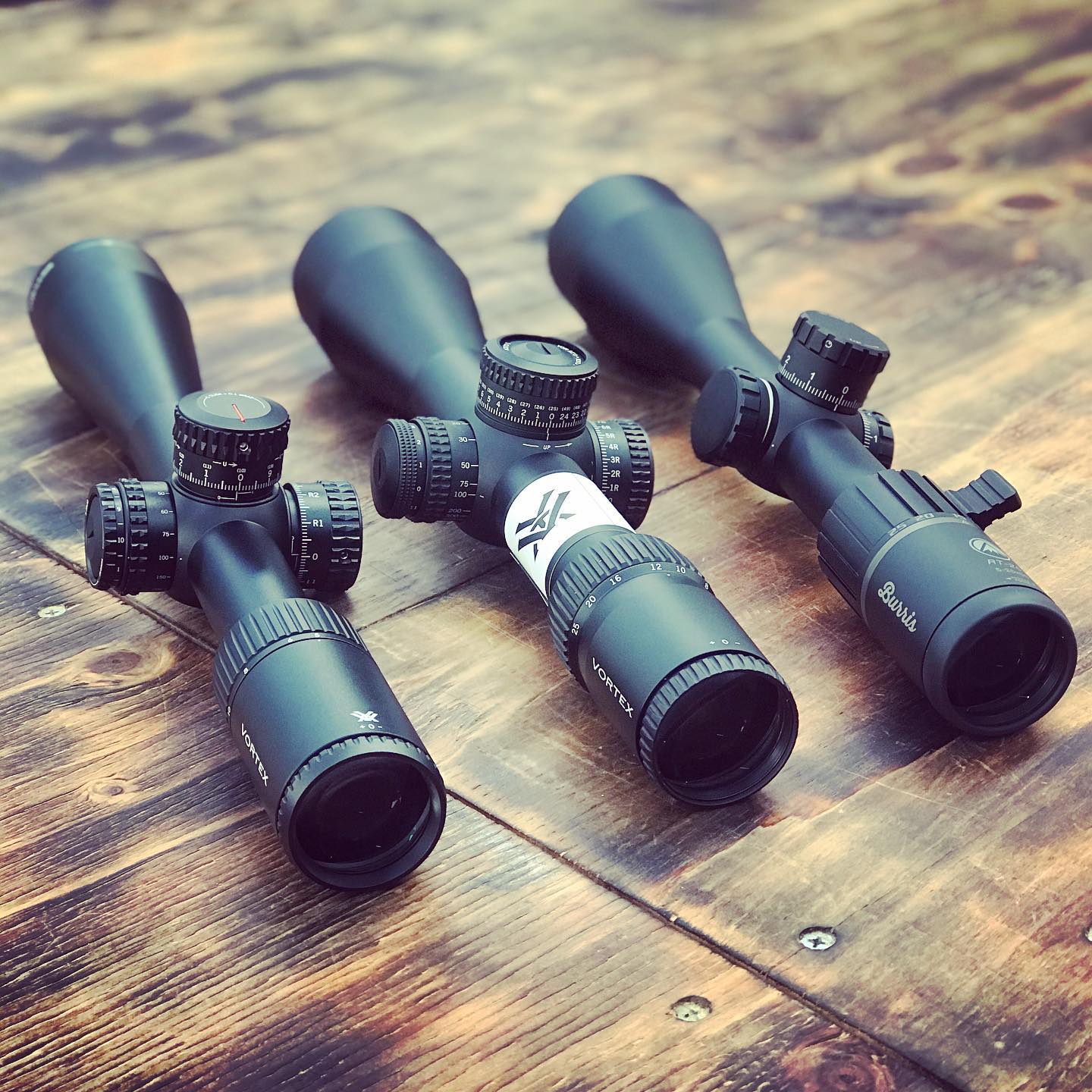 All of these scopes are in the affordable price zone for longer range shooting. This is just a simple touch and see test (not a field test) of the three scopes. In each scope I set the diopter to my own eye sight laid all three scopes on a solid platform side by side and zoomed at 10x on the locking mechanism of a door at around 80 yards. I then dialed out parallax and made the notes below.

Resolution
The Burris was a clear winner here. Looking at the door lock through all three scopes more detail could be resolved with the Burris. The PST came second with the Strike Eagle very close behind the PST. Chromatic aberration was around the same in all three, with perhaps the fringing being more sensitive to head position in the Burris.

Brightness
To my eyes the PST was brightest even though it only had a 50mm objective. The other two, both with a 56mm objective, were pretty similar.

Mechanical Feel
PST is very much the obvious leader. The clicks are more defined than the Strike Eagle. The Burris while having distinct clicks where each click slots into position solidly, has a turret cap that has play in it. The Strike Eagle clicks are less distinctive than both the other two. The PST also has the advantage revolution indicator whereas the others do not.

Parallax
Both Vortex’s have indicative distance markings for parallax adjustment. The Burris has a scale. Distance markings on parallax are very rarely accurate anyway – everyone’s eyes are different. I was able to remove parallax in all three scopes easily by moving my head behind the scope until the reticle stopped moving against the target.

Reticle
The PST has the EBR-2C Xmas tree style reticle. The cross hairs part of this reticle is illuminated. The Strike Eagle has the similar EBR-7C reticle where the whole reticle is illuminated. The difference between the two reticles is in the 2C the numbers are placed down the centre cross-hair whereas the 7C has the numbers in a less obtrusive position down the outside of the Xmas tree. The Burris also has a Xmas tree type reticle that is more finer and is not illuminated. All three reticles have a centre dot. See comments below for images of reticles.

Accessories
Both the Vortex optics come with a Sunshade. The Burris does not. The PST has flip up caps while the Strike Eagle has a bikini cover. The Burris has neither a sunshade nor lense covers of any sort but does have a cat tail lever that can be set to position on the zoom ring.

YOU’RE ONE STEP AWAY FROM ACCESSING OUR SALE SECTION BY SIGNING UP FOR OUR NEWSLETTER.

No SPAM – Just the cool stuff.

We don’t send too many emails but when we do it’ll be stuff you actually want to read. You’ll get a heads up on the latest gear about to land, sneak peaks on new products and the latest shenanigans in the NZ firearm industry.

ps: you can unsubscribe at any time.